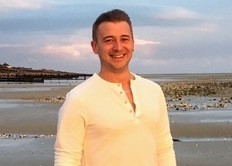 Robert Siddall is a Postdoc in the Cyber Valley Max Planck research group “Locomotion in Biorobotic and Somatic Systems”.

The roboticist from the Cyber Valley research group “Locomotion in Biorobotic and Somatic Systems” at the Max Planck Institute for Intelligent Systems in Stuttgart will now be supported by the Alexander von Humboldt Foundation to continue his research in Germany.

Stuttgart – Robert Siddall, who has been a Postdoc in the Cyber Valley Max Planck research group “Locomotion in Biorobotic and Somatic Systems” for half a year, has now been awared a two-year Postdoctoral Research Fellowship from the Humboldt-Foundation.

"For me this is an incredible chance to combine robotics with the biology research happening at the institute”, says the roboticist, who joined the Max Planck Institute for Intelligent Systems in Stuttgart at the beginning of this year.

Siddall is also an aerospace engineer by trade with an enthusiasm for unconventional mechatronics. He received his Master’s degree from the University of Cambridge and his Ph.D. from Imperial College London. His thesis won the ‘Best UK Ph.D. in Robotics Award’ for his work on Aerial-Aquatic locomotion. Before moving to Germany, Siddall led the development of an agricultural robot in an ESA-funded startup while conducting part-time research on multimodal multirotor aircraft at Imperial College.

In Stuttgart, Siddall and Ardian Jusufi, head of the independent Max Planck research group, have been working on developing life-like robots, inspired by the locomotion and physical structure of animals. Their research is at the interface between engineering and biology – bioinspired soft robotics, a relatively new and promising field.

In particular, Siddall looks at small, arboreal animals such as geckos. They display an impressive suite of adaptations to life in the forests of the world. “Learning from these animals, we will be developing lifelike miniature robots, replicating natural musculoskeletal systems with soft structures and actuation”, he explains. “These robots will allow us to examine some of the most challenging behaviors in the natural world such as climbing, gliding, and other arboreal acrobatics.”

Robert moved to Germany in March to assume a postdoctoral research position, after visiting Dr. Jusufi’s group in November 2018 to be interviewed and they have been in cooperation since. Siddall’s employment resulted in a paper submitted in April and that was published by Springer in Biomimetic and Biohybrid Systems in July. This Humboldt proposal highlighted the strong link between Siddall’s training and Jusufi’s discoveries in locomotion robustness and role of the tail in lizards and bio-inspired robots. The Av Humboldt Fellowship acknowledges this link and combination of interdisciplinary research.

Siddall and Jusufi hope that their research will help to better understand the animal locomotion while simultaneously pushing the limits of what biologically-derived machines can do. “The natural world is a fascinating reservoir of knowledge and I'm very excited to begin the project", Siddall adds.

Each year, the Alexander von Humboldt Foundation grants approximately 500 fellowships to postdoctoral researchers of all nationalities and disciplines from abroad. They must have above average qualifications, be at the beginning of their academic career and have only completed their doctorate in the past four years. A Humboldt Research Fellowship for postdoctoral researchers allows the awardee to carry out long-term research of six months to two years in Germany. Applicants are reviewed based on the proposed research and fit with the academic host group leader’s research in Germany.

Find out more about the Humboldt Postdoctoral Research Fellowship here.